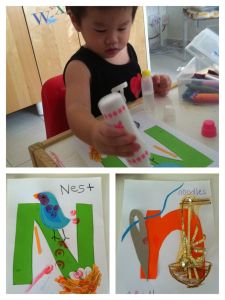 I was particularly excited to do our letter N craft mainly cos I had spent a long time cutting the blasted pieces and planning on how this was gonna go.

We had spotted a little bird’s nest at my parents’ house and that was the (unexpected) initiation to our letter N week. I had originally wanted to build a full on bird’s nest but decided that was a little more than I was willing to go through seeing that I was having a really hard work week so we stuck to just making a paper version. Which worked out pretty well seeing as Q liked sticking the little pieces of paper down.

Originally, our little n craft was meant to only be a needle, but after sticking the needle down, it looked a little bare and I had just finished wrapping several birthday presents so I made some noodles!

And to wrap the day, Q made himself some cup noodles for snack!