Q loves animals and he often asks to make animal menageries with random stuff we find in the house.

Since we’ve been doing a fair amount of cooking and baking we’ve dug deep into our kitchen stash and emerged with a pile of cupcake tin foils. I no longer bake with these so we decided to repurpose them to make “stuff with”. 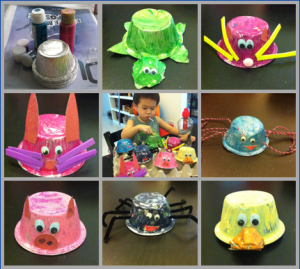 So, we pulled out our paint supplies and set out to make some animals. We found a discarded egg tray and used bits of that to make animal parts (noses, beaks, heads…) and here’s what we came up with!

The foil animals aren’t the most sturdy and they bend and dent a fair bit so we made up stories about them as we went along. Sometimes they got into fights, sometimes they fought wars, sometimes they were careless and fell down. Either ways, it was fun!