We went to watch Esplanade Play Time’s other offering, The Magic Ocean a while back and decided that since we loved that, we would go catch their other offering The Magic Jungle when it came round and I am so glad we decided to do so.

This show is designed for pre-school kids and the show- with their fairly simple humor, music and antics was a big hit with my 2.5yo and the rest of the same-age bracket crowd. There were several older kids who seemed a little bored after a while but the rest of the audience- and the accompanying parents, thoroughly enjoy it. Q even left the theatre singing and mimicking what he saw. 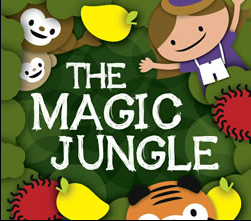 The jungle is full of animals that come out to play when the sun goes down.
Can you see the cockatoos, the sloth bear, the flying fox and the gibbons?
Can you help the tiger and the leopard to find their stripes and spots?
Glide, stomp, swing and jump through the Magic Jungle with Paige!

I have always been a fan of Roald Dahl and while Fantastic Mr. Fox is not one of my top favorites (top fav goes to Matilda, which I have just learned has just been brought to broadway) it was a fairly good read and I decided to take Q to watch the staging of it when SRT decided to run it this theatre season.

The show is basically a retelling of the book: Mr Fox doing his best- and finally succeeding; in outwitting three devious farmers whom he has been stealing from to feed his starving family and other digger, underground living creatures like the badgers, moles and rabbits.

The story wasn’t particular complicated and Q (2.5yo) managed to comfortably follow the story line, the show was a tad long (90min) and towards the second half, I felt every minute of it.

However, the whole place was filled with primary school and kindergarten kids who made a ton of noise (they were prompted to boo the farmers at the start) that spoiled the whole show for me since it made it hard to hear what was happening and their teacher’s constant shushing did nothing to help. The sound crew did a poor job with the microphones and the first lines of each many characters were lost; we were seated fairly near so we could sort of hear what was happening.

I think this show is pretty good for older kids, unless you have a little one that can sit for the duration of the show.

This November, SRT’s The Little Company presents Fantastic Mr Fox by Roald Dahl – the world’s favourite children’s author. Adapted for stage by David Wood, Fantastic Mr Fox is a classic tale of goodies and baddies. It is an inspiring story about the brave Mr Fox who devises a plan to steal food from three mean farmers in order to feed his family. The farmers, Boggis, Bunce and Bean, try to get Mr Fox by any means possible. But with the help of his family and his friend, the Badger, Mr Fox outsmarts the farmers at every turn. Filled with humour and packed with action, this is a fantastic show to be enjoyed by children of all ages.