Q hit a stage about two weeks ago where all he would want to draw are shapes: circles, squares, triangles and rectangles.

All fine, well and good and we started introducing the idea of complete the picture to him: I’d show him a sample picture made of shapes and draw another one half completed and he would finish it up. Usually it’d be something simple like missing wheels on a car (circles) or ears on a cat (triangles).

Then he went on to wanting to draglines. Many many lines, so I begun using his fat do-a-dot markers to draw thick luminescent lines (like highlighters) and he would either draw on them or between them “like a maze” he says. 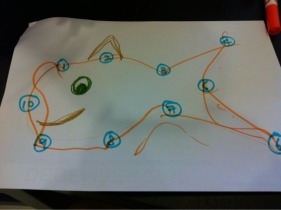 I got kinda bored with doing that so early in the week instead of starting our letter of the week, I introduced him to connect-the-dots since he knew his number sequences quite well and simple line matching (where you join an item from the left column to a corresponding item on the right column).

I left him with very sparse instructions and was pleasantly surprised he managed the tasks well enough. He tore through the stack of self generated worksheets fast enough, mainly, I think, driven by the fact I’d give him two M&Ms for each correct task and soon started requesting for specific picture I had to craft the connect-the-dots around: like Nemo.

His requests have gotten more complex (turtle, rhino, dinosaur…) so maybe I think I will go find ready made ones.