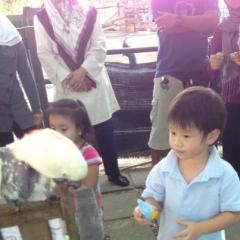 We were at a friend’s baby’s baptism (Hello Alison Png!) earlier in the day. Late, no less, cos we were waiting for Evan to wake from his nap; the fella slept on and on, so I ended up with a (truth be told, much needed) one-on-one date with my firstborn. After the party- grateful that we caught the tail end of things, I decided to swing by Animal Resort so this animal loving kid could go feed some animals.

We were just about done there when this lady who voluntarily takes care of several abandoned parrots came by and brought out said parrots for a small meet and greet. Naturally, we had to go see the parrots, one of which was blind, squawking its guts out and almost featherless. Q, of course, had to know why this bird was bald when its friend was in its full plume glory.

Q to the volunteer lady: Why does the parrot have no feathers?
Lady: Cos the parrot is sad.
Q: Why is the parrot sad?
Lady: Cos his mummy and daddy didn’t want him anymore.
Q: That’s terrible. (To the bird) I’m sorry you are sad, parrot. Here, have a carrot.
(We had a pack of carrots cos we were just feeding the not-very-hungry horse)
Lady: He’s blind, so although he can hear you, he can’t see the carrot.
Q: He cannot see? How come?
Lady: Cos he had no shades in his cage and the sunlight made him blind.
Q: He needs sunglasses.

We left shortly after and he was recounting to me in the car all the animals he saw at the farm and spent a long time talking about the parrot with no feathers. Other than telling me that he had to tell Evan and daddy about the parrot- that he saw, fed and pet it; he had more questions for me. I had an inkling as to how this was going to go down….

Q: Why the parrot’s mummy and daddy don’t want the parrot anymore?
Me: I don’t know son. Maybe they felt like they can’t take care of the parrot anymore.
Q: Did they throw him away?
Me: I suppose so.
Q: That’s not nice. (Long pause)
Me: Some mummies and daddies think they can take care of a parrot, or dog, or baby; but then they realize they cannot. So they have to give them away and hopefully someone else will take better care of them.
Q: Like in Myanmar

It took me a while to figure this link out, then it dawned on me he was talking about Grace Home Orphanage cos Aunty Amar (matron of the home) explained to him the last trip that some kids there were there because their mummies and daddies could not take care of them (or want them anymore).

Me: Yes, like in Myanmar. Grace Home. Like Noble (his friend at the home his age)
Q: We (should) buy Noble bubble tea. I am tired, I going to sleep.

Five minutes later, this little boy was fast asleep in his car seat.

These are the moments I really wonder what goes on in that little mind of his; how much he knows, how much he understands. There are moments he seems to get a lot- far more than I ever give him credit for. Then there are moments, like when he was home and talking to/at Evan- about the giant rabbit, the noisy ducks, the hungry fish and the bald parrot; it seems the depth of what he asked me about in the car never happened. Its like his brain hits a “query”, he asks-gets his answers, files them away in this little mind vault, and he’s moved on to the next curiouser thing.

Kids, they keep you on your toes don’t they?